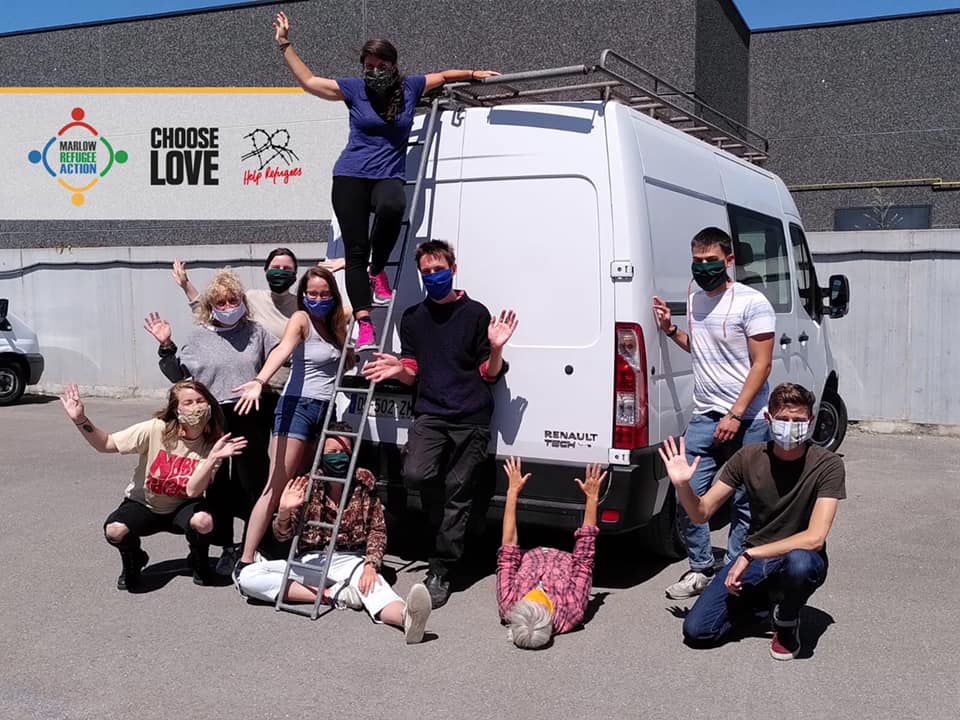 #RelayForRefugees helps provide a van for volunteers on the ground in Calais!

This past week, we received some great news from the Collective Aid team in Calais…

Through our fundraising endeavours, a new van has been part funded by MRA enabling the volunteers to continue on helping refugees along the Northern France coast.

Here’s what they said…

Look how excited we are about this van! We have named her Fizzy as she was delivered with a bottle of bubbly!🍾 A huge thank you to @marlowrefugee & @chooselove for jointly funding a new distribution vehicle for our work in Calais. Our vans are some of the most valuable resources we have – they are absolutely essential for all the work we do.

We are so grateful for all of the support we receive from incredible organisations like Help Refugees & Marlow Refugee Action, not forgetting all of our individual supporters like YOU!

It’s great to see the accumulation of everyone’s hard work through Refugee Week 2020, so well done and thank you again for all who got involved.

Dom Ford sent the following update to Marlow Refugee Action from Calais, detailing exactly how the global pandemic has impacted their everyday

On Sunday the 15th of April I heard a rumour that one of the migrants in the Dunkirk camp had Coronavirus.

The close quarter living conditions, the lack of any suitable washing facilities, and the poor nutrition coupled with inadequate shelter means that if one person in the camp caught the virus, it would be a mater of days before everyone had it, with deadly consequences. All the organisations panicked, and scrambled to find the truth.

Fortunately, the rumour turned out to be just that, however we HAD learnt our lesson and all the organisations sat down the next day to decide how best to respond.

The response, although it differed between organisations, was broadly the same; scale back operations, promote social distancing in the camps, and limit contact with each other, migrants, and frequently touched surfaces.

Lifts to the hospital, deliveries of firewood, provision of clothes and shoes, education and play sessions with the children, even the salad that accompanied the Refugee Community Kitchen’s daily meals all ceased.

Collective Aid now only went out of the warehouse to provide tents, sleeping bags, and one hour of phone charging (half our normal time). With organisations and borders seemingly shutting everywhere, volunteers all over Calais started to head back to the UK, Belgium, Germany, Portugal, Italy, even Australia.

Those who remained, me included, started to fill out and carry around forms in our passports to avoid a 140 euro fine. Currently, for each day we now need to have one to go to the shops, one to go to work, a different one to be at work, another one to head back from work, and a final one to do exercise.

As hard as it has been for us, it has been harder for the people we support. The daily evictions have continued, only now the police wear face masks and disposable gloves whilst taking tents and blankets.

Refugee Community Kitchen ceased operations completely yesterday, leaving 1500 people without a hot meal. The men in the camps have stopped shaking hands, and have started to tap elbows with each other. Some of the children have started an elaborate foot dance as a greeting. There is now absolutely nothing for these people to do during the day, and it’s simply a matter of time before the virus is spread to them, despite all of our efforts to prevent it.

Whilst providing phone charge at one site I tried to explain to a man how we couldn’t give him new shoes, as it would increase the chance of him catching Corona. He spoke to me in perfect English, asking if we still give out tents and sleeping bags. Yes, I said. He then pointed at the generator and looked at me. “You still come here”. Yes, I said, again. “You can give me a tent but not shoes”. Yes, I said for a third time, feeling sheepish and stupid, knowing what he was going to say next. “So I can still catch Corona from you?”